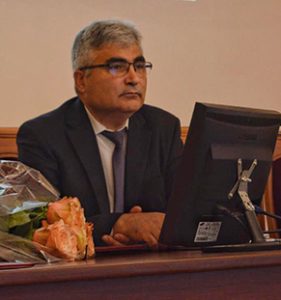 Ergeshov Atadzhan Ergeshovich was born in 1961. In 1985 he graduated from the pediatric faculty of Pirogov Second Moscow State Medical Institute. From 1985 to 1987 he took medical residency course at the Central TB Research Institute of the Ministry of Health of USSR. Since 1987 and to the present he has worked at the Central TB Research Institute, starting as junior researcher, then senior and leading researcher; from 2004 he was acting as Deputy Director for Science and Clinical Care and since 2015 he has been Director of the Institute.

In 1989, Ergeshov A.E. defended PhD thesis, in 1994 – doctoral thesis on the subject “Ultrasound in comprehensive diagnosis of tuberculosis and other lung diseases”. In 2000, Ergeshov A.E. was awarded the academic title of Professor in specialty phthisiology. His sphere of scientific interests lies in the field of diagnosis and treatment of tuberculosis, laser medicine, epidemiology of tuberculosis. He is the author of more than 180 scientific papers, including 4 monographs and 5 guidelines. 7 PhD theses were defended under his direction.

Ergeshov A.E. is Chairman of the Academic Board and Dissertation Council of CTRI, Vice-President of the Russian Phthisiology Society (RSP), Director of the WHO collaborating center. Ergeshov A. E. is physician of superior expert category in phthisiology, roentgenology, health management and public health. In 2006 he was awarded Excellent Worker of Public Health lapel badge for his contribution to the development of national medical science.